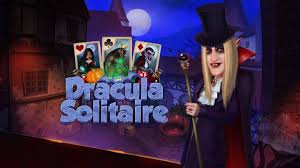 Dracula Solitaire is a one-of-a-kind Solitaire game that melds together the concepts of a vampire story with a gameplay based on the popular incarnation of Solitaire that’s found online. It begins with a short cutscene that tells the story of the main vampire, Grigo, and he hilariously coped with his first days as a beast of the preternatural world. You might want to read through this, or skip right away to the actual game.

Just like most casual games on the market, this Solitaire game lets you choose the levels that you want to play in through a Map. At first, you won’t have much choice at which level to play. However, as you progress and unlock more levels, you can go back as often as you want to levels that you’ve played before. You could, for example, try to beat your own score or try to beat the existing scores in the leaderboards. 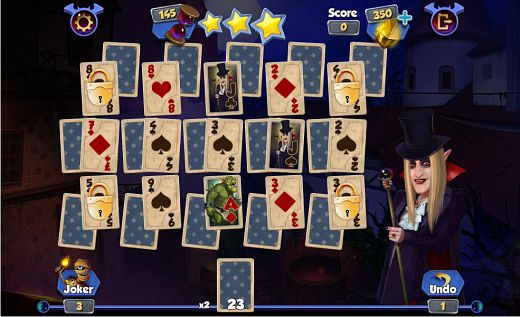 Now, take note that initiating a level will use up a Heart or a Life. You have 4 Lives each day that you’re free to use whenever you’d like. A Life that’s consumed will be recovered at the end of each level, anyway. As long as you win in every level, those 4 Lives can last you up to 10 levels or through the whole day. Lives regenerate every day, but can also be given as a boost by your friends who are playing the game on Facebook.

The rules for Dracula Solitaire are probably the simplest in the genre. Instead of having to think about finding a card that’s lower or higher by one than the card you want to remove from the Playing Field, or from the Deck below. All you need to do, however, is to find IDENTICAL cards. That’s a lot easier; that’s why the pace in this Solitaire game could appear to be faster than you’re used to. 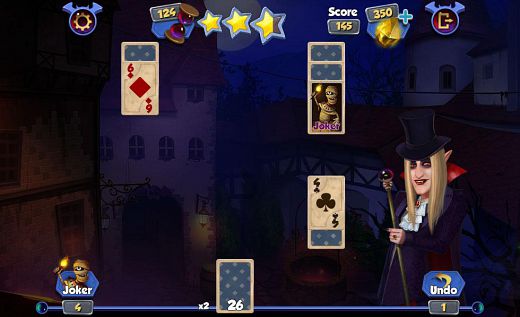